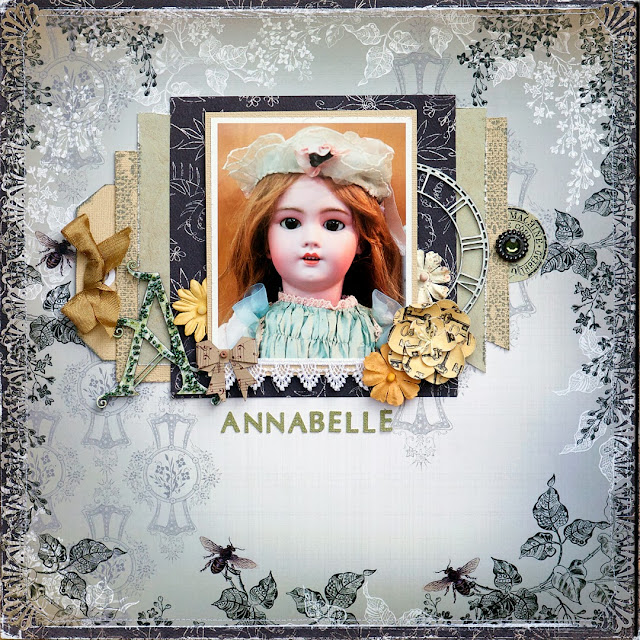 The Christmas collection papers, designed by Denise Boddey are superb; I have really enjoyed creating with them.  This week, I’ve used another of the beautiful ‘Tis Christmas Collection, “Christmas Decorations”.  I wanted to show that a Christmas layout does not always have to be red and green.   With this softer green paper, I combined some Autumn tones to compliment the Antique Doll. 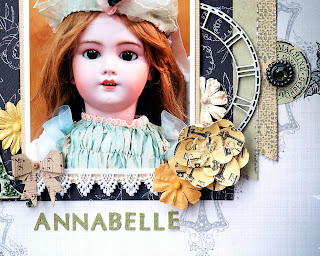 Some of the gorgeous lace available from Meg's Garden This week's challenge includes a fun sketch from the talented Em Stafrace.  The colours are bright and fun and I used some photos of DGS, who has a bright and fun  personality.
I know this is a busy time of the year, but with the sketch, you could whip a page up in no time at all! Why not pop over to CSI and see what the DT have created 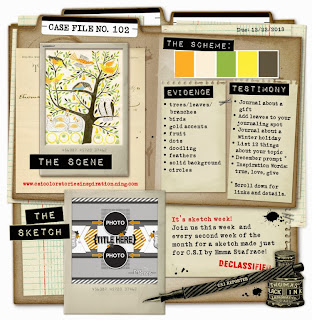 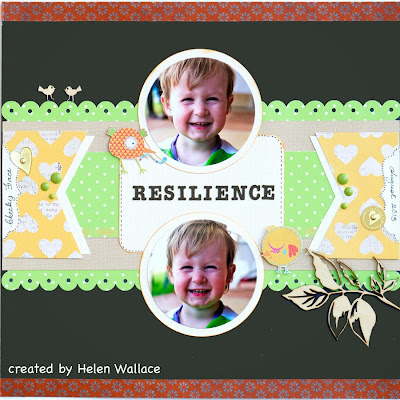 The green paper is some old Creative Imaginations.
The yellow heart paper is by American Crafts
The gorgeous orange washi tape is from Craft Queen The wooden birds are from Studio Calico
The orange and yellow birds were fussy cut from Basic Grey, Knee Highs,  "Double Dutch"
Green enamel sugar dots and alphas are  by Prima 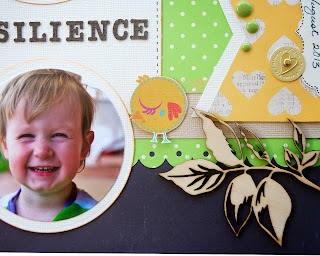 TESTIMONY is on the back of the page
I went to the 4th of December writing prompt and chose,  “If I could give any gift to any person, what would it be?”

When these happy photos were taken you had just arrived as Buzz Lightyear at your little cousin’s party.   You approached guests with a “Gidday mate” and the thumbs up sign, ready to rock and roll.  You tackle everything head on, absolutely fearless and often have the scars and bruises to prove it.

If I could give any gift to you, it would be that you always retain your exuberance for life, your ability to get up and try again, the tenacity to persevere until you succeed; the gift of resilience.  Love Granny August 2013

These colours are my favourites, I love the green and pale aqua together and the mood board looks so festive, so I went with a Christmas photo from 2012. I know it's a busy time of the year, but why not whizz across and see what the team has created to inspire you?
CSI LINK
You have until 15th December to enter the challenge. 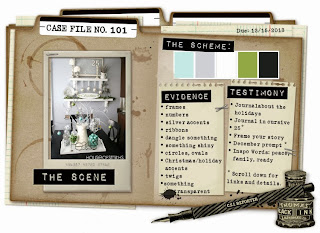 I started off with white cardstock, then used a couple of stencils with texture and ink to create the background.  The grey colour was introduced with the stamp at top Left and bottom Right.
The Christmas title is as old as button up boots, but I think it looks OK with the trees. 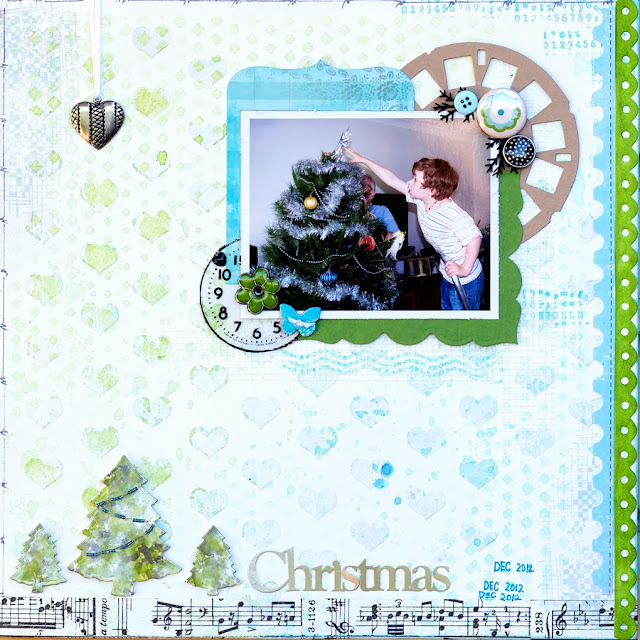 The little trees, I cut with a Spellbinder die, coloured with alcohol inks, then added some beads to decorate. 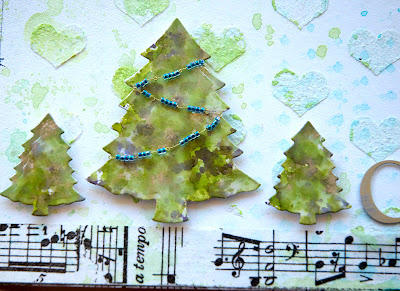 The number stamp is from Prima.
The twigs are made with a Martha Stewart punch.
The blue frame is by Heidi Swap 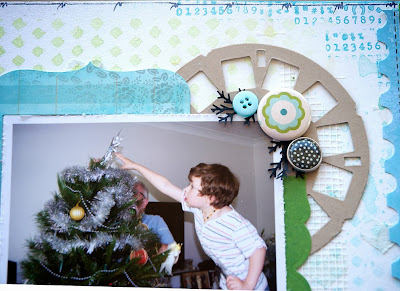 I still love these enamel flowers by Maya Road which are very old;
in person years they would be vintage. 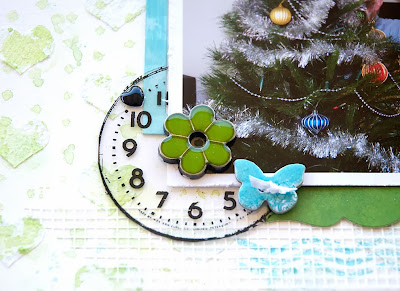 TESTIMONY
I went to the December prompt and was inspired to write about the difference in Christmas traditions when I was a child.  The journalling is on the back of the layout and it reads:-

Last year our DGS helped decorate the Christmas tree.  He took each ornament out with care, even the ratty old ones, that his Daddy and his Uncles made in kindergarten.   His favourites were the Father Christmas figures, which he clumped together in a posse at the the front.  We chatted about what Father Christmas might bring, if he was good and he expressed an interest in an ABC book and some Lego.

When I was a little girl, Christmas was a time of wonder and joyous anticipation.  It was often fiercly hot on Christmas Eve and we were put to bed for a few hours before being woken at 11.45 to go to Midnight Mass.  The priest wore gold vestments, the air was fragranced with incense and the Nativity scene awaited the arrival of the Christ Child.

We had to go back to bed when we got home and were squirming with excitement, so we often whispered and giggled for hours.  We never saw Father Christmas arrive, but he always came and left just one present at the end of the bed.  One Christmas, I can remember sitting up and fossicking around in the dark, sure that he had forgotten me; but then my fingers stumbled across some strings and I knew he’d brought the tennis racket that I’d asked for.

What has this got to do with the photo, you may well ask?   I can’t help wondering if the children of today, who have so many toys, have the same amount of joy that we experienced with that single present we received on Christmas morning.

The talented owner and designer of CSI, Debbi Tehrani, has recently combined with Scrap 365, a beautiful English Magazine to create some challenges.  I was thrilled to be invited to submit a layout for publication in the Dec/Jan issue. 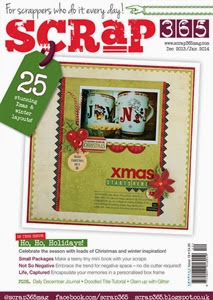 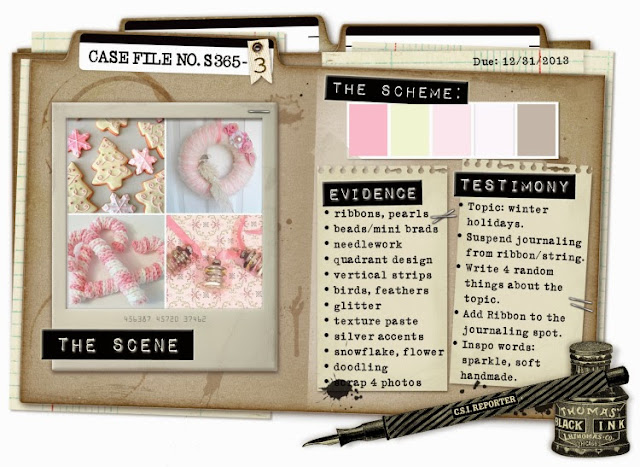 CSI and Scrap 365 challenge
Although the pictures seem to suggest Christmas, the soft pinks and cream reminded me of  photos of my DGD, so I decided to make a little girl page.  Many of the evidence prompts worked well with a pretty page and the inspiration words “sparkle and soft” were the catalyst for my journalling. I love the combination of colours, because I would not necessarily put grey with the lighter colours, but I think it provides a good foil for the pink and cream. 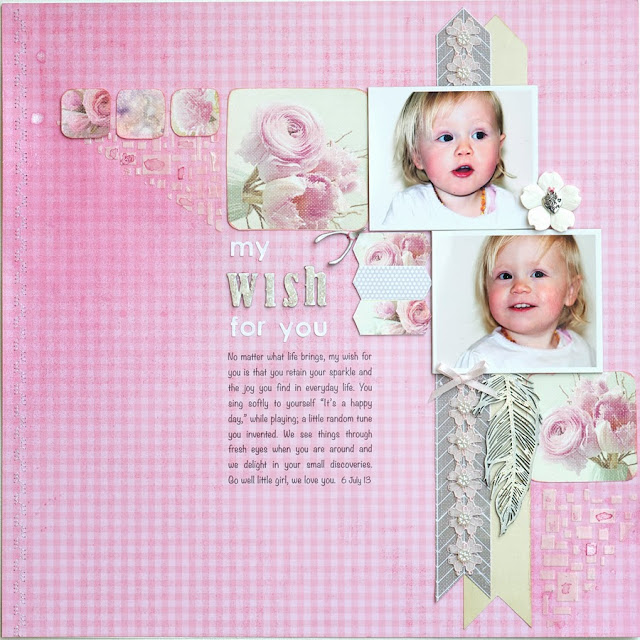 EVIDENCE
Ribbons, pearls, beads, needlework, vertical strips, feathers, texture paste, silver accents, flowers
TESTIMONY
I used the words sparkle and soft in my journalling which reads:-
No matter what life brings, my wish for you is that you retain your sparkle and the joy you find in everday life.  You sing softly to yourself, "It's a happy day", while playing, this is a little tune you invented.  We see things trhough fresh eyes when you are around and we delight in your small discoveries.   Go well little girl, we love you. 6th July 2013
Thanks for calling in, I hope you have enjoyed your visit and come again.

Copyright © 2012-2016. All photographs, journalling and artwork on this blog are the property of Helen Wallace. All rights reserved. Please do not copy, reproduce or distribute without permission. If you’d like to use any of the ideas, concepts or techniques, please feel free to contact me via email. Thank you. 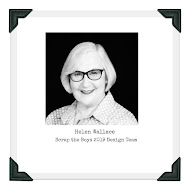 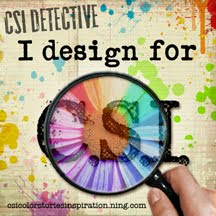 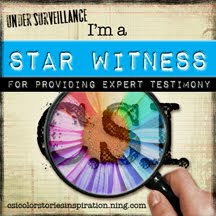